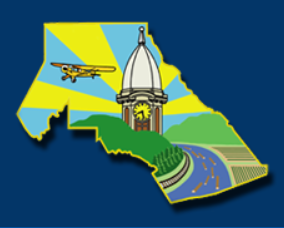 The 2019 Municipal Election will be held on Tuesday, November 5, and being prepared for what to expect can make the process a lot smoother.

Those 18 and older and who have registered to vote by October 7, 2019, are eligible to cast ballots in November. (To register to vote online, change your address, or check your voter registration, visit www.votespa.com.)

While inside the polling place, voters are asked to not discuss political subjects.

Election officials will ask your name, address and possibly your date of birth. After determining you are eligible to vote, you will be asked to sign your name in the poll book.

Remember that this November is the first time that Clinton County voters will be using the new election machines. Voters will manually fill out a ballot form, which is then entered into a machine for tabulation.  The Clinton County Elections Office is holding demonstrations to help voters familiarize themselves with the new voting system ahead of November 5.  Click here to learn more.

Unable to make it to the polls on election day? Consider applying for an absentee ballot before October 29 to be sure your voice is heard! Click here for more information.

Those who won the May primary for their respective political parties will move on to the November 5 ballot.

Below is a quick rundown of the Democrats moving on to the November 5 Election.

To review a sample ballot for your voting precinct, click here. 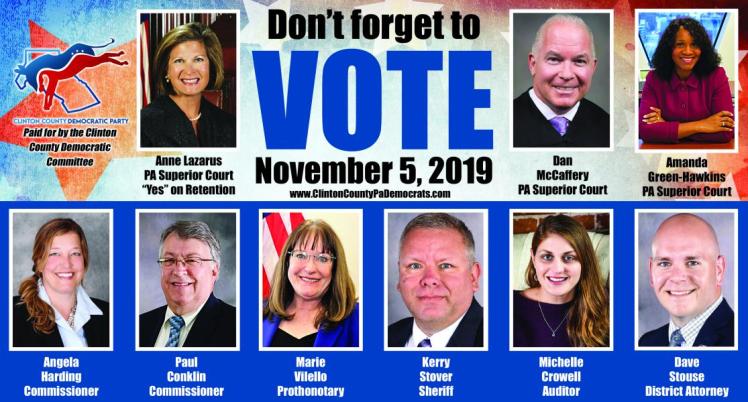 Amanda Green-Hawkins and Daniel McCaffery will face off against two Republicans for two open seats on the Pennsylvania Superior Court, a court that handles civil and criminal appeals from Pennsylvania’s county courts.

Judges serve 10-year terms and run for re-election in up-or-down retention races. The court currently has eight Republicans and six Democrats, with one Republican not running for another term.

Anne Lazarus, a Democratic judge on the Pennsylvania Superior Court, is up for retention this year and will be seeking a “yes” vote from voters in order to retain her seat on the court.

Paul Conklin and Angela Harding are the two Democrats who will be on the November ballot for the commissioner race. Two Republicans will also move on to the November ballot, and voters will be able to vote for two of four candidates on the ballot.

Incumbent Marie Vilello is seeking another term as county prothonotary. She was unopposed in the primary, but will have a Republican challenger in November.

Kerry Stover is seeking another 4-year term as county sheriff and is running unopposed.

Incumbent Michelle Crowell and two Republicans will move on to the November ballot; three seats are up for election.

Dave Strouse is seeking another four-year term as district attorney. He is unopposed.

Every precinct in Clinton County has seats up for election this year (including city council, township supervisors, borough council and municipal auditors).

In the City of Lock Haven, voters will be selecting a new mayor, and they’ll also be voting to fill seats on City Council.

Joel Long is seeking to become the next mayor. He is facing off against a Republican challenger for the open seat.

William Mincer, who was appointed to City Council last year, will be on the ballot for City Council.

To see who will be on the ballot for your voting precinct, click here.

Wayne Koch received both the Democratic and Republican nominations to continue in his role as Keystone Central School District’s Region I School Board Director, representing Green, Logan and Porter Townships and Loganton Borough.

Boise Miller received both the Democratic and Republican nominations to continue in his role as Keystone Central School District’s Region VIII School Board Director, representing Castanea and Bald Eagle Townships and Flemington Borough.

Note: The Clinton County Democratic Committee does not endorse candidates, but makes every effort to help evenhandedly publicize individuals seeking the Democratic nomination or running on the Democratic ticket. We embrace the will of the people following the Primary Election and wholeheartedly support the nominees selected in the election process.

Processing…
Success! You're on the list.
Whoops! There was an error and we couldn't process your subscription. Please reload the page and try again.